A Cover Letter Is Not Expendable

Q. You are getting ready to apply for a job electronically, and your résumé is ready to go. Do you need to prepare a cover letter? Are they necessary in this day and age? 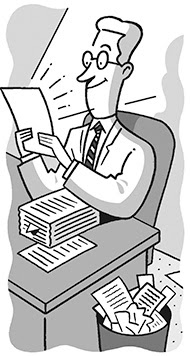 A. Cover letters are still necessary, and in a competitive market they can give you a serious edge if they are written and presented effectively.

Cover letters are a graceful way to introduce yourself, to convey your personality and to impress a hiring manager with your experience and your writing skills, said Katy Piotrowski, an author of career books and a career counselor based in Fort Collins, Colo. You can also tailor them to a specific company in ways that you cannot with a résumé.

Ms. Piotrowski recently had a job opening at her small company, Career Solutions Group, and she was dismayed when about a quarter of the 200 applicants did not send cover letters. Most were within five years of graduating from college, she said, reflecting a more informal mind-set among younger people.

Q. How should your cover letter be organized, how long should it be, and what should it say?

A. First, do your best to find the decision maker’s name, and use it in the salutation. If you are applying to a blind ad, say “Dear Sir or Madam” or “To the Hiring Manager.” Ms. Piotrowski said she received cover letters that had no salutation at all or began with “Hey there” — not a strong start. If you want to be on the safe side, use a colon after the salutation, although some people now feel it is permissible to use a comma in an e-mail message.

Your cover letter should be short — generally no longer than three or four paragraphs, said Debra Wheatman, a career expert at Vault, a jobs Web site.

In your first paragraph, explain why you are writing — it may be that you are answering an ad, that you were referred to the company through networking, or that you learned that the company is expanding, said Wendy S. Enelow, author of “Cover Letter Magic” and a professional résumé writer in Virginia.

In the middle paragraphs, explain why you are a good candidate, and show that you are knowledgeable about the company. Then convey a clear story about your career, and highlight specific past achievements. This can either be done as a narrative or in bullet points, Ms. Enelow said.

You can also highlight qualities you possess that may not fit the confines of a résumé, Ms. Wheatman said.

She once worked in human resources at Martha Stewart Living, and recalls reviewing applications for a chef in a test kitchen. One woman had a career in manufacturing, but her cover letter described how she had grown up in a family that was passionate about cooking and where she had frequently made meals from scratch. The woman got the job despite her peripheral work experience.

Finish your letter by indicating that you will follow up in the near future (and make good on that promise). Sign off with a “Sincerely,” “Cordially,” “Thank you for your consideration” or similar closer, followed by your name and, if you like, your e-mail address.

Q. Where should your cover letter appear, in an e-mail or in an attachment?

Then, if you really want to make an impression, make a hard copy of your cover letter and résumé and send it to the hiring manager by regular mail. Attach a handwritten note that says, “Second submission; I’m very interested,” Ms. Piotrowski said. “I’ve had clients double their rate of interviews simply from doing that,” she said.

Ms. Enelow calls this “double-hitting,” and says she has seen it work remarkably well. She said a senior-level client of hers got an interview and was hired because the hard copy of his cover letter and résumé reached the company president, whereas his electronic application was rejected by someone in human resources because it did not meet certain rigid criteria.

Q. What are some common mistakes in cover letters?

A. A cover letter with typos, misspellings and poor sentence structure may take you out of the running for a job. If you cannot afford to pay someone to review your cover letter and résumé, enlist a friend or a family member with good language skills to do it instead.

Another misguided thing people do is to make the cover letter all about them: “I did this, I’m looking for, I want to ... I, I, I.” Structure your letter so that it stresses the company and what you can do to help it reach its goals, Ms. Piotrowski and others said.

Another danger is including too much information — for example, very specific salary or geographic requirements, Ms. Enelow said. It is also unwise to point out that you do not meet all the criteria in the job description, she said. You can deal with that later, if you get an interview.

Hiring managers are looking for ways to exclude you as they narrow down their applications, she said. Do not give them that ammunition.