A Career Switcher Looks to Build a Better Résumé

Many workers who lost jobs in the hardest-hit sectors of the economy are now looking to change careers. But crafting a résumé that shows the benefits of hiring an industry outsider can be challenging.

In this installment of The Résumé Doctor, three recruiting experts critique a résumé from a job hunter eying a move into facilities management from commercial construction.

Mark Peterson served as project manager for a new football stadium at the University of Minnesota before his layoff last July.

• The Job Seeker: Mark Peterson, 47, of Woodbury, Minn., was laid off in July from a senior project manager/sales position at a small commercial-construction company where he had worked for 19 years. Though he was hired in November as a senior project manager for a rival firm, the contract job is commission-based and doesn't include medical or other benefits. He says the position is unlikely to yield a salary anywhere close to his prior annual income of around $125,000.

• The Objective: Mr. Peterson is seeking a mid- to senior-level executive position in facilities management. Mr. Peterson would like to stay in the Minneapolis metro area and is seeking a minimum annual salary of $85,000, significantly lower than his previous salary but on par with what he expects in the current economy. If the economy were to improve, he says he would be looking for $100,000 to $125,000.

"Any company that has a large campus or multiple buildings to manage could work well for me," he says.

• The Experts: Offering feedback on Mr. Peterson's résumé are Ken Rose, a senior client partner in Chicago for executive-search firm Korn/Ferry International Inc.; Nanci D'Alessandro, a vice president and national account executive in New York for commercial real-estate firm Grubb & Ellis; and Julia Hicks, director of human resources at Wesleyan University in Middletown, Conn. Universities are one of his target employers because of their many buildings to manage.

The Doctor Is in 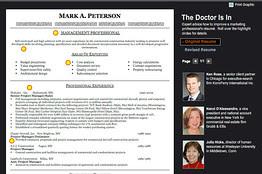 • The Résumé: Mr. Peterson has kept his fairly standard résumé to one page. He leads with his contact information, followed by a summary statement and 11 areas of expertise. The résumé goes on to describe his career in reverse chronological order with bullet points and concludes with details of his education and training.

• The Positives: Our experts were impressed with some of the accomplishments cited in Mr. Peterson's résumé. They also gave it kudos for being clutter-free despite its short length.

• The Advice: Much of the information that hiring managers want to see—such as the size and scope of projects he worked on and certifications he holds—is there, our experts agree. What Mr. Peterson needs to do is revamp the layout so it is more pleasing to the eye and easier to quickly scan, they say.

Read The Rest Of The Advice

Email ThisBlogThis!Share to TwitterShare to FacebookShare to Pinterest
Labels: resume